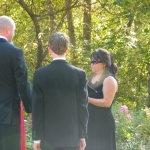 Mari decided to become ordained after a stressful wedding in 1997.  She was performing as an MC/DJ in Tacoma, WA.  The bride and groom were there, the photographer, most of the bridal party and close family members however, 100 guests including the minister that was to officiate the wedding were all stuck north of a huge pile up on Interstate 5.

The minister and many guests were coming from Seattle towards Tacoma and although they did their best to make it to the wedding on time, traffic was held up for 6 hours and the ceremony was delayed for several hours.

The bride was stressed out and crying in the Bride’s room and normally, Mari would do what she could to fix the situation.  In this case, Mari could do nothing but wait along with everyone else.

The photographer mentioned that he was “ordained” so worst case scenario he could officiate the ceremony.  One way or another the couple would be married.

Everyone, including the officiant arrived and the ceremony the bride wanted took place.  What a relief.

Stories don’t always have a happy solution and Mari wanted to be sure she could come to the rescue if needed.  Since 1997, she’s had to step in to save many ceremonies where either the officiate was late, had an emergency or other issues.

Mari would prefer to perform ceremonies that are planned to have her officiate in advance but can always do a “last-minute” ceremony.

She has performed ceremonies in living rooms, hotel lobbies, near the beach, in the mountains ANYWHERE you choose.  You are free to write your own vows or use our template as is or tweak it to fit your style.

We also have other ministers and judges available.  Contact us for more info.

Prices are as low as $250 depending on the date and location.

You can reach Mari here

“Our company has worked with Marie and her company several times now and the service has always been excellent. They’ve been willing to go above and beyond to work with us in regards to price and services…and we’ve thrown some off the wall requests out there. If you’re looking for help making your event a unique hit, this is the company you want to talk to.”

I am blown away by Mari’s talents as a photographer. We got way more out of booking her Officiant/photography services than I could have ever dreamed of on such short notice. Not only was she a pleasure to work with according to those in charge of details but she stepped in and helped when things did not run smoothly. Weddings are usually chaos, Mari made everything run smoothly with professionalism and her trademark charm. She made my dreams come true and I hope to work with her again in the future and will be spreading the word. She also had my photos edited faster than anyone expected. … END_OF_DOCUMENT_TOKEN_TO_BE_REPLACED

We went through a hiring surge and with the surprisingly 100% rsvp response, we were maximum capacity in the room – which eliminated the designated activity area. Carlos assessed the situation, quickly adapted the program to fit the extremely limited space, made adjustments, and instilled confidence with me that everything would go well.  And it did. The room was difficult to work in, but my group participates, and Carlos was wonderfully engaging.  Feedback was to have him back to facilitate future events.

Once again a great job of coordinating with us as well as the site vendors.

Sound: I believe we have expectations that our group will be quiet during the program!  The sound was as good as it gets for our group.

It is always such a treat to work with you and your help with AV and lighting was really great.

Mari, you were absolutely amazing!!! I couldn’t have asked for a better DJ for our wedding! I am so thankful we were able to work with you – you took so much stress off my fiance, parents, and I.  I will highly recommend you to anyone I hear looking for a DJ (or thinking they can handle wedding music themselves;))Thanks again!

We really loved Mari. She did an excellent job at our reception. She was super friendly and had wonderful suggestions for the timeline of the event. We will recommend her to friends and if we ever need a dj for an event again we will definitely hire her.

You did a great job!  We especially liked the lighting you included, and the photos on the wall and the mix of music.  It made the old GYM feel really awesome and fun. Great Job!  We are sorry some of the boys were obnoxious with the prizes.  You did a good job with them.

You are awesome, amazing, fantastic, and incredible at what you do!! I will fill out the survey ASAP. The kids had a blast, hats off to you!!!!! So fun!!!!!!

Mari was AMAZING, WONDERFUL, and FANTASTIC! She made the party! She was recommended by our caterer who saw her at a previous engagement and said she was great, which was an understatement! She made the party exciting and fun for all the kids AND adults….miracles do happen! Would highly recommend her services. So happy with the event!

Will definitely recommend to friends/co-workers and will be a repeat customer when the opportunity presents itself in the future.